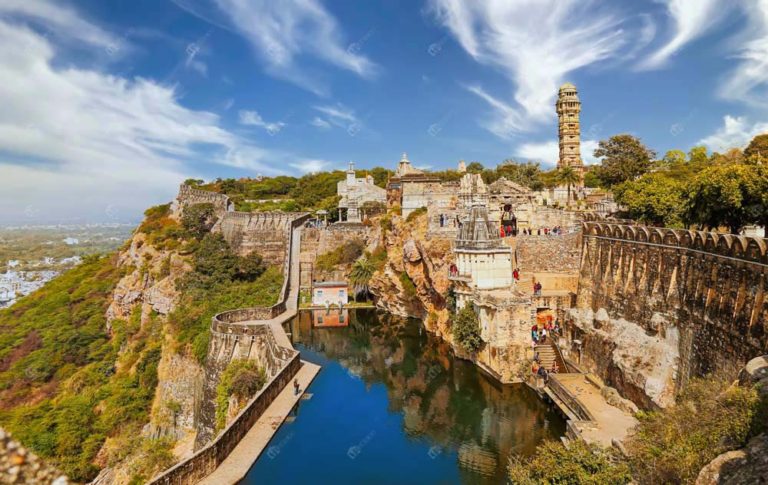 On the Berach River, a tributary of the Banas River lies Chittor District in the southern part of Rajasthan – home to the Chittorgarh Fort, the largest fort in India and Asia. The legendary fort of Chittorgarh is infused with medieval Indian history and today, the fort amazes thousands of visitors from around the world. Once the capital of Mewar, the celebrated fort was a safe haven from the combatants. A symbol of overwhelming power and rare heights of luxury, Chittorgarh fort resonates with heroic tales. Owing to its magnificent edifice and display of Rajput culture in truest form, the Chittorgarh Fort was declared a UNESCO’s World Heritage Site in the year 2013.

Chronicles of the Chittorgarh Fort

Earlier the fort of Chittorgarh was known as Chitrakut. Chitrangada Maurya or Chitrang Mori was a chieftain of the Mori Dhangar clan who laid the foundation of the fort of Chittorgarh. According to myths, Bhima (one of the Pandava brothers of Maharabharata epic) struck the ground here, which resulted in water springing up to form a large reservoir. The water body allegedly formed by Bhima is an artificial tank called Bhimlat Kund. In the 8th century, the fort was taken into control by Guhila leader Bappa Rawal. This sturdy fort since then witnessed reigns of many monarchs reverberating many historical events. The fort was impounded not once by thrice by ruthless intruders. The Hindu Rajput chieftains of Chittor fought fiercely to maintain their sovereignty.

In 1303, the Delhi Sultanate tyrant Alaudddin Khalji led an army to conquer Chittorgarh, which was ruled by the Guhila King Ratnasimha. The infamous Sultan coveted the beguiling queen of Mewar, Padmavati. To avoid captivity the Rajput women committed suicide jumping into flames and Rajput men killed themselves to avoid slavery.

The Fort flourished during the reign of Rana Kumbha in 15th century and 84 structures were built inside the fort for its defense. Later, in 1535 the fort fell into the hands of Sultan Bahadur Shah of Gujarat. It is said that a similar mass sacrifice happened in 16th century when the Sultan captured the fort. Later, the fort was taken over by Mughal Emperor Akbar and remained under the Mughals, until British took assumed power over whole India.

Chittorgarh evokes memories of dauntless Rajput men and women in the intermittent battles that they had to fight against raiders from Northwest or Delhi. Chittor witnessed both the ravages of war and the triumphs of the spirit. The city of Chittor stands strewn with monuments and battlements as evidence of the blood and gore that it went through in medieval times.

The fort of Chittor is deemed as one of the most outstanding forts of India and is irrefutably the “Pride of Rajasthan State”. The formidable fort sprawls over a 600 feet high hillock covering a massive area of 700 acres above the plains of the valley drained by the Berach River. A standing sentinel to the courage and valor of Chittorgarh, this honey colored fort is sturdy as well as visually stunning. The awe-inspiring fort with its palatial complexes, gates and temples never ceases to astound tourists. Shaped as a large fish with a length of 5 KM and circumference of 13 KM, the fort was built on the basis of Rajput architecture though ideas like vaulted substructures belong to Muslim architecture. After walking around 1 KM on a limestone bridge, constructed over river Gambhir, a tributary of Berach river, you will find yourself in a six-gateway fort occupying a large portion of the plateau. The rest of the plateau is almost barren except for a few temples and a rusted loop road that runs through the region. There is so much to explore in this rock island and many legends to hear. Almost near crumbling, the fort holds many unparalleled structures that everyone should visit before it goes into dust with passage of time.

The fort, which is also known as Water Fort, contained 84 water bodies inside its grounds, of which 22 exist today. The fort covers 65 historic structures, which include four palaces, 19 large temples, 20 water bodies, 4 memorials and a few victory towers.

There are several structures inside the fort of Chittorgarh, built during different eras. Let us highlight here 3 crucial sopts:

1. Vijaya Stambha or The Tower of Victory

Adjoining Rana Kumbha’s Palace stands Vijay Stambh, a nine-storied tower made of red stone. It is the landmark victory tower for Mewar monarchy and is the focal point of fascination in the whole Chittorgarh Fort. It was raised in 1440 AD by Rana Kumbha to celebrate his triumph over the combined armies of Malwa and Gujarat sultanates led by Sultan Mahmud Khilji. The tower is dedicated to Lord Vishnu. If permissible, climb 157 stairs to reach the top floor of the victory tower to look over a panorama of the fort. The illumination of the tower after dark makes it more enticing.

Surajpol is the eastern gate of the fort. It is the main entrance of the fort and offers a fabulous view of the plains.

Right opposite to the gate, there is Neelkanth Mahadev Jain Temple.

To the north of the gate, you will find the 22 meters tall Tower of Fame, also known as Kirti Stambha built by a Jain merchant namely Jeeja Bhagerwala during the reign of Rawal Kumar Singh. This tower is dedicated to Jain Tirthankar and has many carvings of the Tirthankar. The tower has seven levels and a stairwell allowing access to the top of the tower. The tower is illuminated in the evening and looks even more appealing.

Towards the south of the fort, near the 8th century sun temple dedicated to Goddess Kali, lies the palace of Maharani Padmavati, fondly called as Rani Padmini, the queen of Mewar. It is said that the gates of this palace were later taken by Akbar for his Agra Fort.

The Legend of Queen Padmavati

The Rawal of Mewar, Ratnasimha, also known as Ratan Singh or Ratan Sen fell in love with the daughter of the king of Singhal kingdom, the then Sri Lanka. Following a chain of events Rawal Ratan Sen and Padmavati wedded but an enmity ensued between Padmavati and the first wife of Ratan Sen, Nagmati. Raghav Chetan, a Brahmin, banished by Ratan Sen from his court for fraud, reached Alauddin Khalji, the sultan of Delhi and was full of praises for Rani Padmavati, the enchantress. Alauddin was hell-bent on acquiring her and hence, besieged Chittor.

It is said the Alauddin caught a glimpse of Queen Padmini’s reflection on a series of mirror and was impressed. For the sole purpose of capturing her, he decided to attack the fort. It is said that he waged a war for 8 months, before imprisoning King Ratnasimha, the ill-fated husband of Queen Padmini. After the fall of Mewar King, the women inside the fort along with Queen Padmini sacrificed themselves in a pyre of fire rather than submit to invaders. This mass immolation is called ‘Jauhar’ and epitomizes the fiery spirit of the Rajput women. The men of the fort also killed themselves with their swords. Later, Alauddin handed over the fort to his son, Khidr Khan.

Thus each stone on the fort of Chittorgarh is inlaid with sagas of bravery and hecatomb by men and women to uphold Rajput pride and that inspires the narrative of Chittorgarh Fort. The anecdotes of Queen Padmavati is penned down in many literatures – poems, novels which immortalized the endurance of her, bestowing Rani Padmini a cult following in Rajasthan households. A magnum opus Bollywood movie named “Padmavat”, a biopic of the fierce queen popularized the epic of Maharani Padmavati throughout India and abroad.

Summary : Chittorgarh Fort In A Nutshell

Cost of Entry for Indians – INR 50 per head; INR 25 for students and senior citizens

Cost of Entry for Foreigner – INR 200 per head

Share your travel stories of Chittoragarh Fort and other iconic hill forts of Rajasthan. Also if you are planning a trip to the royal land of Rajasthan, do leave us a comment here!

We use cookies on our website to give you the most relevant experience by remembering your preferences and repeat visits. By clicking “Accept All”, you consent to the use of ALL the cookies. However, you may visit "Cookie Settings" to provide a controlled consent.
Cookie SettingsAccept All
Manage consent

This website uses cookies to improve your experience while you navigate through the website. Out of these, the cookies that are categorized as necessary are stored on your browser as they are essential for the working of basic functionalities of the website. We also use third-party cookies that help us analyze and understand how you use this website. These cookies will be stored in your browser only with your consent. You also have the option to opt-out of these cookies. But opting out of some of these cookies may affect your browsing experience.
Necessary Always Enabled
Necessary cookies are absolutely essential for the website to function properly. These cookies ensure basic functionalities and security features of the website, anonymously.
SAVE & ACCEPT