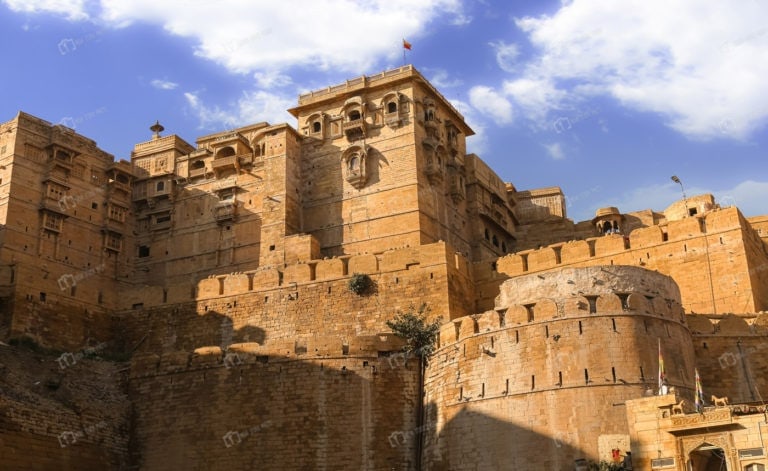 Jaisalmer Fort, commissioned in 1156 by the Rajput Rawal Jaisal – the founder of Jaisalmer city, is the second oldest fort in Rajasthan. Sited at the crossroads of important trade routes (including the ancient Silk road), the Jaisalmer Fort is a UNESCO World Heritage Site and India’s only “living fort”. The fort continues to inhabit around 5,000 people – mostly descendants of Brahmin and Rajput families who once ruled the kingdom. For centuries, the city of Jaisalmer flourished within the enclosures of Jaisalmer fort. The first settlements outside the fortification was recorded in the 17th century to accommodate the growing population. As you steer through narrow alleys inside the fort compound, an astir city greets you. The historic Jaisalmer Fort, a testimony for many battles is one of the milestones for Rajasthan tourism. Jaisalmer royal Dushyant Singh is the “crowned king” and the present custodian of this 800 years old Fort.

The Golden City Of Jaisalmer

Jaisalmer at the heart of the Great Thar Desert is titled the “Golden City” because of the yellow sand casting a golden shadow to the city and its neighboring areas. The medieval city stands on the fold of Trikuta Hill, a sandy expanse of the desert, crowned by the fort, also curved in yellow sandstone, keeping a vigil over the city.

The gigantic 1500 feet long and 750 feet wide fort and the base has a 15 feet tall wall forming the fort’s outermost ring, within its triple ringed defense architecture. The fort constitutes 99 parapets, of these 92 were built between 1633 and 1647. The architecture of the Jaisalmer Fort is integrated in Islamic and Rajput finesse. There are 4 gateways to enter this fort i.e. Ganesh Pol, Akshya Pol, Suraj Pol and Hawa Pol.

The main structures inside the fort are:

The fort’s massive yellow sandstone walls are a tawny lion color during the day, fading to honey-gold with the setting sun, thereby camouflaging the fort in the yellow desert. Hence the fort is aptly called as the “Sonar Quila” or Golden Fort. The prominent clifftop position of the fort makes the sprawling towers of its fortifications apparent from many miles afar. The Golden Fort is a grand symbol of Rajputana glory and royalty.

Counted amongst the largest forts in the world, Jaisalmer fort is the most celebrated landmark of Jaisalmer city. Unlike other olden forts of Rajasthan, Jaisalmer fort does not emit an aura of quietude – on the contrary, the 12th century fort thrives with shops, restaurants, residential accommodations, hotels, museums etc. The Jaisalmer Fort is one of the few living monuments in the world and home to a fourth of the city’s population. Life inside Jaisalmer Fort burgeons – a row of minuscule shops vending curios near the main gate, the buzz of a lively market after passing by the boundary walls, the familiar scenes and noises of residential areas – washed clothes hung out to dry, children playing around, the occasional whistle of a pressure cooker coming out of havelis. Few deserted havelis are turned into museums, preserving household items used by the former occupants for generations. Climbing up the stairs of these havelis or meandering down the lanes inside the fortress could be challenging, for they are very narrow. The alleyways were constructed this way to inhibit the enemies to enter with their elephants.

Princely states in India have relinquished power, but in Rajasthan monarchical pride does not cease to exist. Dussehra calls for an elaborate celebrations inside the Jaisalmer fort, a vibrant fair is organized graced by the king of Jaisalmer.

The glimpse of sunset at the backdrop of sand dunes creates magic. Wonderful opportunities for tourists, especially professional photographers to click unforgettable pictures. The golden fort looks picturesque bathing in the early morning light when the first rays of the sun touches the sandy ground, these sights inspire imagination to creative souls. The world renowned film maker and writer Satyajit Ray conceived a thriller story “Sonal Kella” (The Golden Fortress) honoring the Golden Fort, later adapted into a film by him. Climax scenes were shot in and around the Jaisalmer Fort. After the release of the film, the name “Sonar Kila” was widespread enticing travelers to come and visit this wondrous fort.

Summary : Jaisalmer Fort In A Nutshell

Eateries: The fort has numerous eateries, including Italian, French and native cuisines

Share your travel experiences of “Golden Fort” or “Sonar Quila” with us. Also if you are planning a visit to Jaisalmer Fort or any other Hill Forts of Rajasthan, leave us a comment.

We use cookies on our website to give you the most relevant experience by remembering your preferences and repeat visits. By clicking “Accept All”, you consent to the use of ALL the cookies. However, you may visit "Cookie Settings" to provide a controlled consent.
Cookie SettingsAccept All
Manage consent

This website uses cookies to improve your experience while you navigate through the website. Out of these, the cookies that are categorized as necessary are stored on your browser as they are essential for the working of basic functionalities of the website. We also use third-party cookies that help us analyze and understand how you use this website. These cookies will be stored in your browser only with your consent. You also have the option to opt-out of these cookies. But opting out of some of these cookies may affect your browsing experience.
Necessary Always Enabled
Necessary cookies are absolutely essential for the website to function properly. These cookies ensure basic functionalities and security features of the website, anonymously.
SAVE & ACCEPT